NASF celebrated its 100th anniversary in 2020 and 2021 with a Centennial Challenge campaign.

The campaign honored both the work of the association in providing a unified voice for state and private forestry, as well as the tremendous social, environmental, and economic contributions of state forestry agencies nationwide.

As part of the celebration, NASF’s 59 forestry agency members planned unique 100-themed events, programs, or initiatives called “challenges.” Each Centennial Challenge was thoughtfully developed based on each forestry agencies’ strategic priorities. Some state forestry agencies relied on their social media presence to complete their challenges, while others planted trees, held events, or implemented new initiatives. While COVID-19 put a cramp in most states’ challenge plans, NASF’s members found ways to safely connect with private and public forest stakeholders in person outdoors and through digital mediums, including social media and video conferencing.

“Nearly every one of NASF’s members appointed an agency lead to develop and implement a unique Centennial Challenge on behalf of their state or territory. These centennial point persons were responsible for planting tens of thousands of trees, conducting thousands of trainings, and hosting hundreds of events in celebration of our 100-year anniversary. They deserve a standing ovation for their awesome work.” — 2022 NASF President Christopher Martin

Ultimately, through their work to complete Centennial Challenges in 2020 and 2021, NASF members successfully:

You can read about each NASF member challenge in the report, “State Forestry Marks a Century: A Centennial Challenge Campaign,” and online at NASF100.org, the association’s online clearinghouse for all things related to the campaign. Additionally, as forestry agencies completed their challenges, NASF celebrated their progress on social media and NASF’s blog, at virtual meetings and events, and in National Woodland Owners Association Magazine articles. State and territorial contributions to the campaign were also featured in a Forest History Society multi-page magazine spread, NASF’s 2020 and 2021 annual reports, and a 100-year history book published in the fall of 2021. 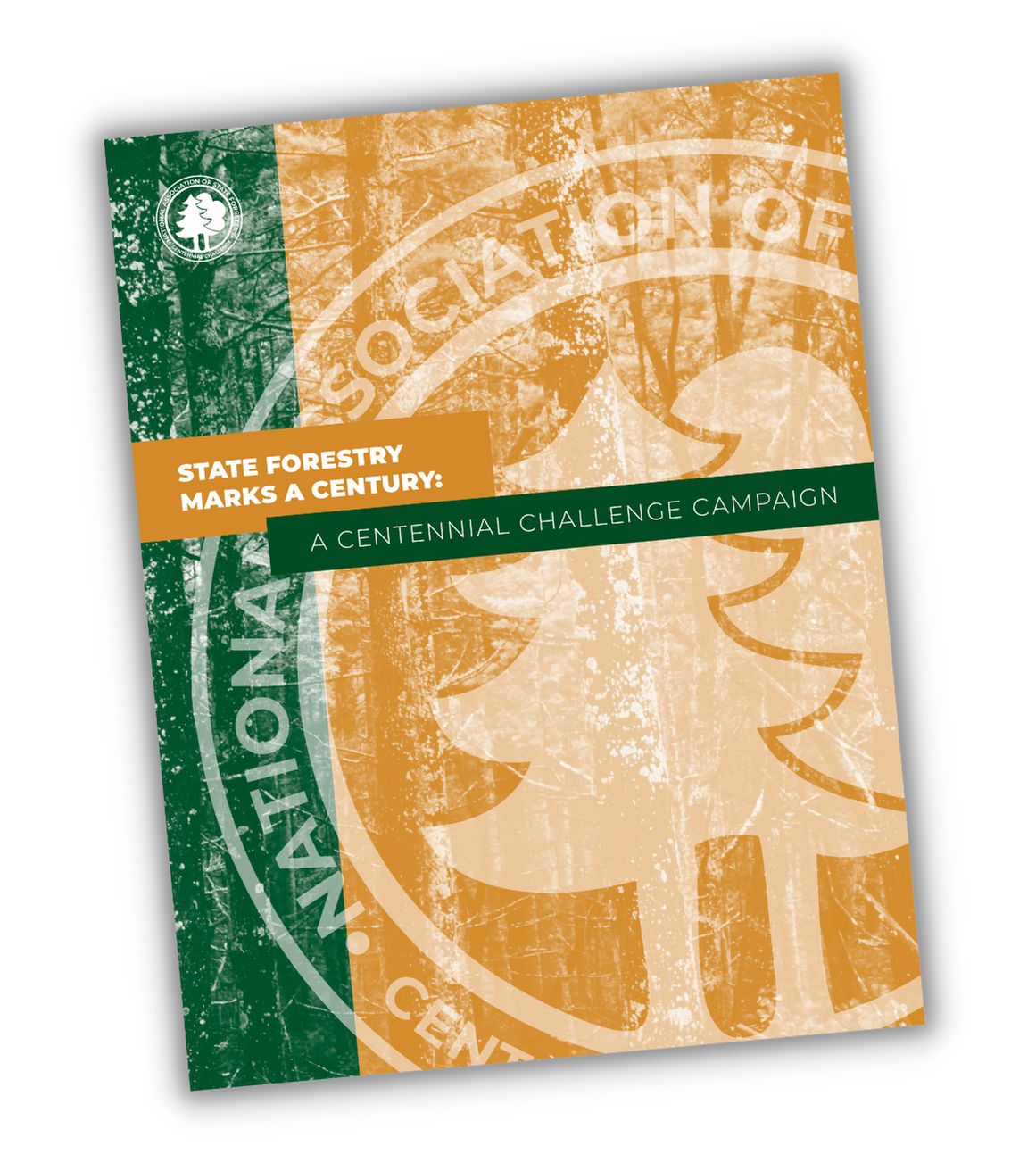 For its own Centennial Challenge, NASF held a launch party in August 2021 to mark the opening of the Stately Treasures collection and tour at the National Arboretum in Washington, D.C. USDA Forest Service Chief Vicki Christiansen, who had previously served as state forester for Arizona and Washington, gave the reception’s keynote address on collaboration and shared stewardship.

Today’s Stately Treasures collection is an evolution of the Grove of State Trees, a project initiated by the USDA and state foresters in 1990. Initially, the grove was intended to cultivate samples of all 51 state trees across 30 acres of the National Arboretum’s grounds in Washington, D.C. In time, however, many of the grove’s trees not suited to the local conditions faltered, and by 2019, it was clear a new take on the display was needed. By the summer of 2021, a new interpretative state tree experience stood in its place. The Stately Treasures self-guided tour includes stops at the official “state trees” of all 50 states and the District of Columbia. From its start over 30 years ago until now, this project has been a shared effort of the National Arboretum, the Forest Service, and the NASF.

In addition to the Stately Treasures tour at the Arboretum, NASF released a limited-edition Smokey Bear poster updated to feature the state trees of all 50 states, five U.S. territories, the District of Columbia, and three nations in free association of the U.S. Proceeds from the “Stately Treasures” state tree poster fund NASF’s work to advocate for state forestry agencies in Washington, D.C.

To learn more about the Centennial Challenge campaign, visit NASF100.org and explore our interactive event map (pictured below).