When I arrived in the Florida Panhandle three years after Hurricane Michael hit, I didn’t expect to see what I saw. The severity of the storm’s damage was still evident in nearly every roadside pine stand, and in the occasional ruin of a gas station or barn. When we met with Calhoun County timber farmers, I got an even better picture of what havoc Michael wrought.

Imagine it with me. Small saplings peek out from the slash on land once densely forested, now dotted or striped with blackened hills of masticated trees. On other properties not as far along in clean-up, once towering pine trees still stand, though some are bent and most have been snapped in half, like thousand-pound matchsticks. For this county, where timber drives almost 80% of gross revenue, these were scenes of catastrophe. 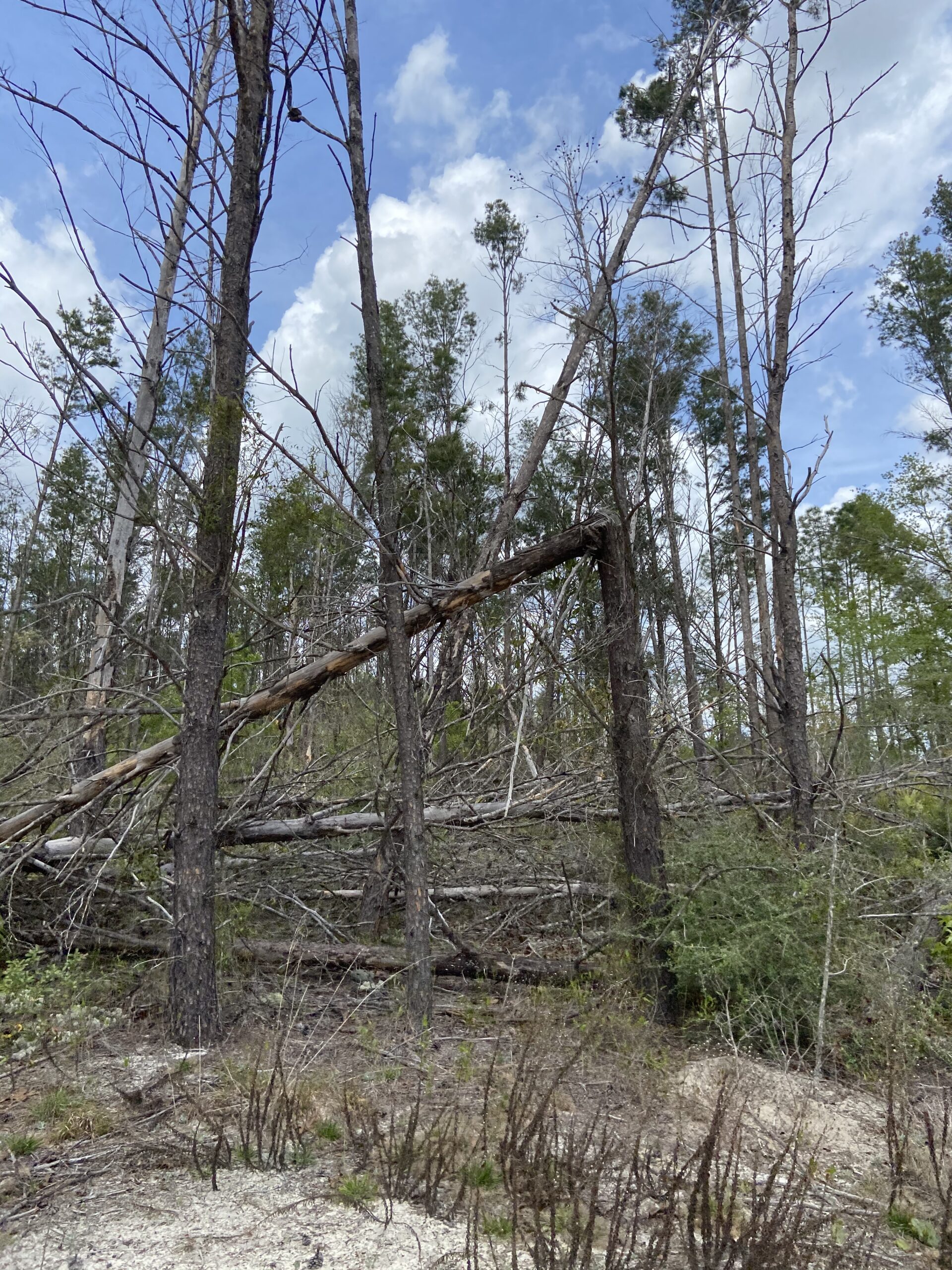 Far from the Everglades and across the Eastern-Central time zone boundary, Calhoun feels separate from the rest of the Sunshine State. Timber has historically been a major industry in this area, with southern yellow pine and loblolly pine making up the majority of stands. Here, many timber farming families can trace their roots in Calhoun back to the early 20th century. Land stewardship is their way of life. In just two hours, that way of life was upended.

I met with three timber farmers in the Panhandle. The first was Will Leonard, the cofounder of Timberland Solutions, Inc., a company helping local forestland owners gain access to Florida Timber Recovery Block Grants. Will, a fifth-generation timber farmer, grew up alongside the pine trees planted by his forbearers. Today, he nurtures the saplings that will be his children’s inheritance.

While Will was not present during the storm, he knew it had come. The devastation was everywhere; wood barns laid flat, roofs were missing, but the most notable change was the of absence of standing trees. He illustrated the county’s timber losses in terms of logging trucks: lined bumper to bumper, they would wrap one and a half times around the planet.

But with despair came hope. Will spoke of the heroes who worked all hours to harvest the downed pines before they rotted. The community came together to support one another, but they needed help on a greater scale – they needed government support. As a direct result of their efforts in Washington, D.C. – and with the help of the Florida Forest Service, the Florida Department of Agriculture and Consumer Services, the Florida Forestry Association, and the National Association of State Foresters – the U.S. Department of Agriculture funded block grants for timber farmers who suffered devastating losses due to Hurricanes Michael and Florence.

Alison and Jim Browne, owners of Fox Pen Farm, are new to timber farming. They bought their property with their lifesavings, hoping to create wooded habitat for wildlife that they could also sustainably harvest. They spoke of their experience with the storm – how one of the storage buildings on their property collapsed, and how they were afraid their house would be next. Jim said he and Alison witnessed the eye of the storm overhead: “We weren’t hopeless; we were defeated,” said Alison.

The storm subsided in the evening and Alison and Jim walked out of their home to see complete darkness. “There were no sounds from birds or animals, no lights from any neighbors’ houses in the distance,” Alison said. The morning after the storm, she bent to the ground and for hours picked up screws that were dislodged by the tremendous winds. “There was nothing else you could do,” Jim recalled. 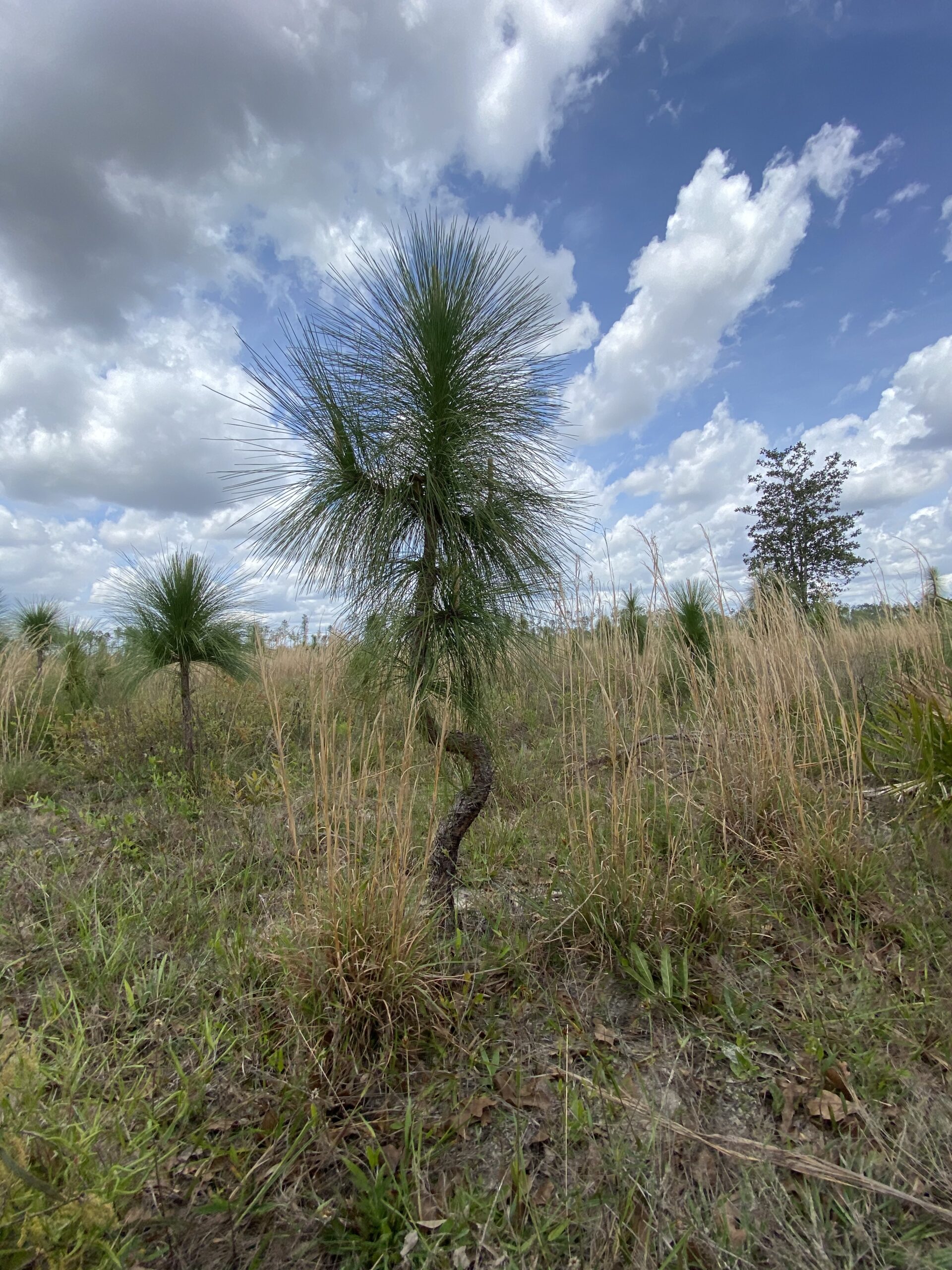 During my visit, Alison took me on a tour of the progress they’d made in the three years since Michael. Fields of seedlings and three-year old saplings were separated by scarred, but alive 30-year-old pines that withstood the storm. Alison stopped to point out a sapling they named Michael; a young tree that somehow continued to grow, bending around a branch that fell on top of it during the hurricane. Today, Michael is alive and well, growing strong up toward the sky.

The parallels between the land healing and community rebuilding are undeniable here in Calhoun. Without the bravery of the timber farmers and the support of the Florida Forest Service, the road to recovery may never have materialized. “I think we all emerged stronger… with more of an appreciation for the land, the living it affords us, and the place and people that are here,” said Will Leonard.

The Florida Timber Recovery Block Grants Program launched in August 2020. As of September 2021, nearly $137 million in emergency support has been distributed to the thousands of individuals and families who cultivate America’s forests – our number-one renewable and carbon-storing resource. For Jim and Alison Browne, this support allowed them “to clear the property, site prep, (and) purchase trees” to replant 62 acres. The block grants also set an important national precedent. A precedent that would afford timber farmers access to emergency relief during uncertain times when natural disasters are putting forests at risk.

Hear the story of Hurricane Michael from the Florida timber farmers who lived through it. In NASF’s latest short film, “Forgotten Storm,” Alison, Jim, and Will recall their experiences during and after Hurricane Michael.