The World Economic Forum (WEF) launched 1t.org in January 2020 and has since helped establish Trillion Tree chapters across the globe, including in the United States.

The 1t.org platform seeks to unify individuals, businesses, NGOs, and governments in a “global initiative to grow, restore, and conserve one trillion trees around the world” by 2030 (that’s over 128 trees planted or maintained for every person on Earth!).[1]  [2] The effort also represents a “bid to restore biodiversity and help fight climate change.”[3]  Its sponsors say that nature-based solutions, such as  carbon sequestration in forests and wetlands, can provide up to a third of the global emissions reductions called for by the Paris Agreements.[4]

President Donald Trump announced the U.S. would join 1t.org within hours of its launch. He subsequently reiterated his support for 1t.org during his February 2020 State of the Union Address.[5]  Also in February, Congressman Bruce Westerman of Arkansas introduced the Trillion Trees Act, a bill aimed at increasing tree planting and incentivizing the use of wood products.[6]  While the bill didn’t set any specific targets for American tree planting, it did commit the U.S. to contributing to the global 1t.org effort. 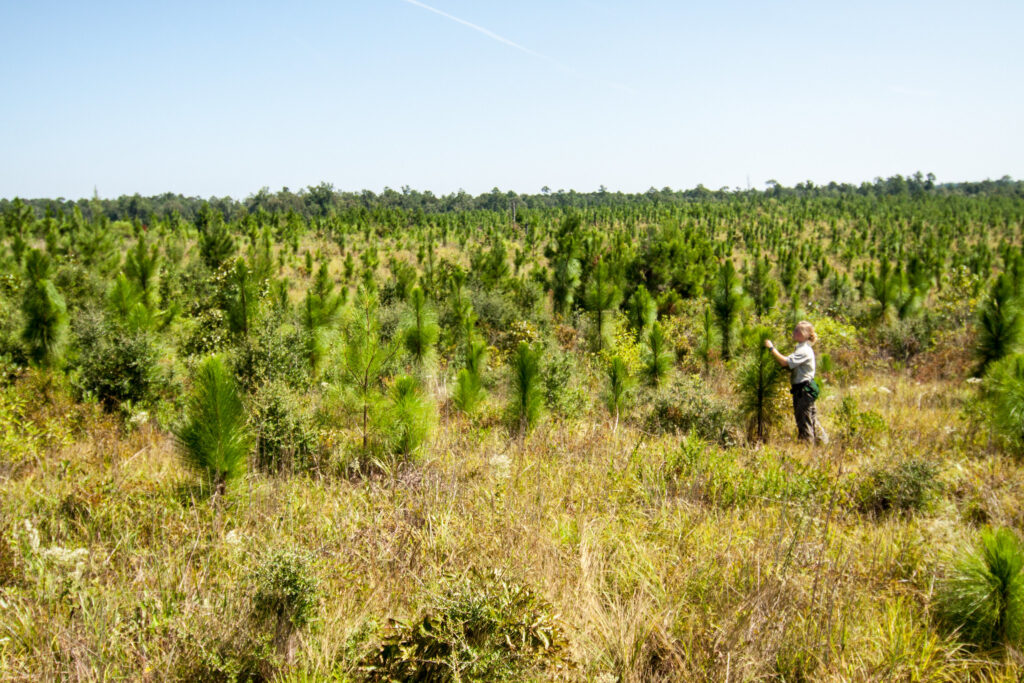 Determining tree-planting targets for 1t.org is the subject of some debate. According to the World Resources Institute (WRI), the U.S. has the capacity to plant up to 60 billion new trees by 2040 (about 3 billion trees annually) without reducing food production.[7]  These 60 billion new trees would remove up to 540 million tons of carbon from the atmosphere, or offset about 10% of U.S. net carbon emissions. The WRI also found that projects undertaken in existing forests could restore up to 21 billion trees.[8]

No matter how the goal is reached, state foresters will be instrumental to any reforestation efforts undertaken in the U.S.  First, active forest management is central to the health, productivity, and resiliency of America’s forests. State and private forests make up over two-thirds—over 520 million acres—of the nation’s forests, and state forestry agencies play an essential role in actively managing these landscapes.[9]

State foresters are also responsible for providing wildfire protection on 1.5 billion acres across the country. By suppressing wildfires at the right time and place (and mitigating wildfire risk and preventing human-caused wildfires when and wherever  possible), state forestry agencies help protect Americans, their homes, and our forests from catastrophic wildfire.[10]

Most importantly, state forestry agencies provide and support the country’s tree planting infrastructure. State tree nurseries produce an average of 170 million tree seedlings each year, and 29 states operate at least one seedling nursery.[11]  Planted in 12’ by 12’ foot grids, states produce enough seedlings to reforest 400,000 acres per year, and many states have the capability to expand their seedling producing capabilities.[12]  This infrastructure is crucial to helping private landowners and communities plant trees in areas damaged by wildfire, along rivers and other waterbodies as buffers, and in urban communities for shade and beautification.

Planting a trillion trees is no easy feat, but state forestry agencies are uniquely situated to assist in the effort.

Tyler Hoguet is NASF’s 2020 Summer James Hubbard Intern for Policy and Communications. He can be reached by email at intern@stateforesters.org.