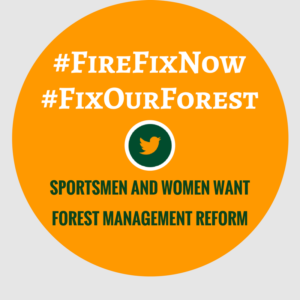 The National Association of State Foresters joined a diverse coalition in support of wildfire funding reform today for a Twitter “tweetstorm" aimed at Congress.

Partners like The Nature Conservancy and American Forests tweeted throughout the day using the hashtag #FireFixNow, and the Theodore Roosevelt Conservation Partnership launched a tool on their website that makes finding members of Congress and sending them direct tweets with the campaign hashtag quick and simple. With 2017 bringing some of the most devastating wildfires in recent history, the #FireFixNow campaign has been successful in using social media to engage the general public on this important issue.

With more than half of U.S. Forest Service budget used to suppress wildfires last year, there is limited funding left to actively manage and protect our nation’s forests. Lawmakers that join the #FireFixNow Twitter campaign support increased wildfire funding for the Forest Service, an end to fire borrowing, and better management of federal, state, and privately-owned forests and trees. You can join us in advocating for much needed wildfire funding reform by tweeting with the hashtag "#FireFixNow"!

Want to learn more about how wildfire suppression is funded? Click here.