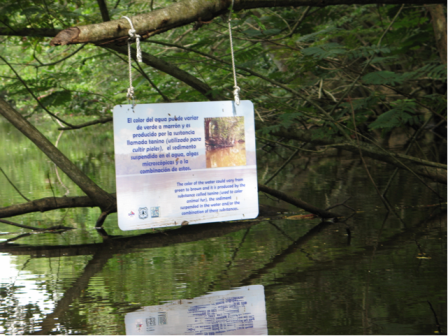 Through an agreement with the Department of Natural and Environmental Resources of Puerto Rico (DNER), PECES, Inc., co-administers and elaborates strategies for the economic development in line with environmental parameters of the Humacao Natural Reserve. Eventually, the Tourism Company of Puerto Rico joined these efforts thus creating the Humacao Natural Reserve Microenterprises Incubator Program.

As a result of said Program, the Ecotourism Initiative of Humacao (INECOH) was born, which is directed towards the promotion of ecotourism in the Humacao Natural Reserve. In order to continue the growth of this Program, on February 12, 2012, PECES submitted a project proposal to the Urban and Community Forestry Program (PFUC, by its Spanish acronym). The proposal sought economic incentives for: the adequate labeling of interpretative guides, the creation of an interactive webpage with the biodiversity information of the Reserve and the option of reserving online tours and the installation of a new selling point to connect all concessions.

In all over 1,560 people would be impacted by the labeling, over 750 users would benefit from the website monthly, and over 22 direct and indirect new jobs will be created. On October 11, 2012, then Secretary of the DNER, Daniel J. Galán, and the President of PECES, José Oquendo, signed a Collaborative Agreement for the development of the proposal under the PFUC incentives.

Throughout the terms of the Agreement there was a series of difficulties, nevertheless PECES has shown an incredible ability to overcome these obstacles and carry out their project. One of the biggest setbacks suffered by the organization was the delay in the start of the implementation of the project due to the length of the contracting process.

This delay resulted in the impossibility of finishing all the proposed activities in the length of time established in the Agreement and in the proposal. Notwithstanding, after a series of communications between State Forester Cristina Cabrera, Program Coordinator Rosamaria Quiles, Magaly Figueroa of the USDA Forest Service and staff members of DNER’s Finance Division and Legal Division an extension to the term of the Agreement was obtained.

Despite the delay in the initial implementation of the project, PECES managed to finish the project. Among their achievements are: the labeling of terrestrial paths, the reproduction of 40,000 path maps, the participation of over 60 students in a recycling models contest, the celebration of a Recycling Queen Contest, an Ecotourism Open House, a training by the Tourism Company for microentepreneurs and community activities.

The key elements to overcome such difficulties were having an organized and committed working team, having clear objectives and an organized working plan, maintaining an open line of communication between all involved agencies (specifically the DNER and the USDA Forest Service), knowing how to prioritize, due diligence in the involved agencies, filling progress reports on the established date and making the most of the incentives received.

Learn more about this project at www.proyectopecesinc.org.