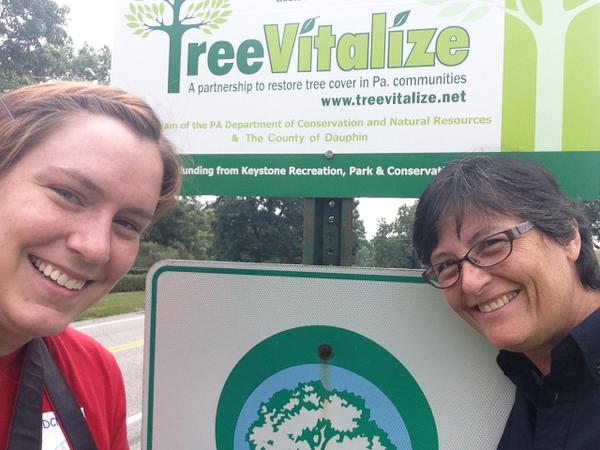 I spent today going around Harrisburg and wrapping up the week in the office.

Ellen Roane, an urban forester, was my companion for the morning and early afternoon. As we revisited sites that had been planted a few years ago, she explained the great things and the challenges that face someone working in urban forestry.

Harrisburg has been hit with some hard times in the recent years, but the Pennsylvania Department of Conservation and Natural Resources (DCNR) urban foresters are doing their best to preserve and plant new trees and communicate the value trees provide to the residents.
The TreeVitalize “this tree gives back" program, an idea which they adopted from Ken Holman (with whom I spent time two weeks ago), involved putting an actual dollar amount of value onto the tree based on several factors that it contributes to the community, including storm water control, heating and cooling reduction, pollution control/clean air generation, property value, and more.
Ellen also told me about a set of computer programs which are available free to communities which help with the planning and execution of urban tree management as well.
We explored some communities in Hershey, where some of the trees towered over the streets, creating beautiful canopies we drove under. We also visited the Five Senses Garden, which involved plants that appealed to all the senses (touch, smell, etc.). Ellen talked about a time when McDonald's attempted to take over the area to build and how they fought to preserve it, and won! Her passion for urban forestry was truly inspiring.
After walking around downtown Harrisburg and photographing the capital building, I ended the day doing a little work back at the office. It was great to have a chance to begin to look through all the awesome shots I got this last week…Pennsylvania truly did not disappoint!