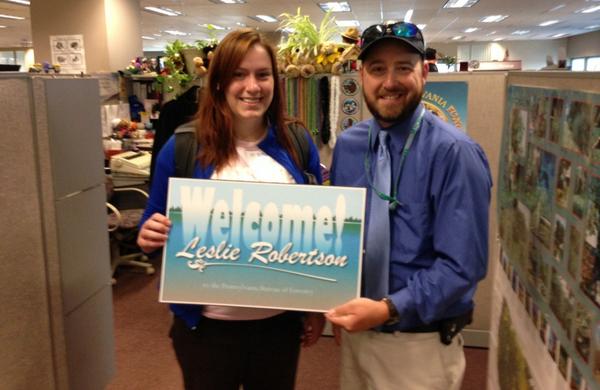 This morning Andy Duncan, a Department of Conservation and Natural Resources (DCNR), Bureau of Forestry program specialist, picked me up from my hotel and we drove up to Penn Nursery near State College. There we met up with Jeff Woleslagle, DCNR forestry communications section chief.

Fran Chadick, one of the nursery supervisors, gave us a wonderful tour of the facility. The only one remaining out of five similar facilities in Pennsylvania, the nursery was quite impressive. I learned that the nursery isn’t allowed to sell to private landowners; it is strictly used for state forests.

The beds are all planted by machines, but much of the seed extraction which occurs before planting involved a lot of manpower. One of the buildings we went into had a very cool conveyor belt system with sifters to streamline the process; seedlings would be sent down a shoot to be inspected by hand to ensure they were up to standard, then wrapped up and put on special carts.

We were also able to see a huge temperature-controlled room which kept the seedlings dormant until they were needed. I learned that some of the seeds can be stored for years and still sprout. For some species, seeds that date back to the 1950s are still viable for use!

The nursery also housed two sign shops (metal and wood) which create all the signs the DCNR needs for the bureau state parks and forests. Again, much of the signage is done by hand, including the routing/engraving and painting on wooden signs. The precision and quality produced was nothing short of amazing. Also on site was picnic table production, with a biomass-heated room which used the leftover scrap wood as fuel.