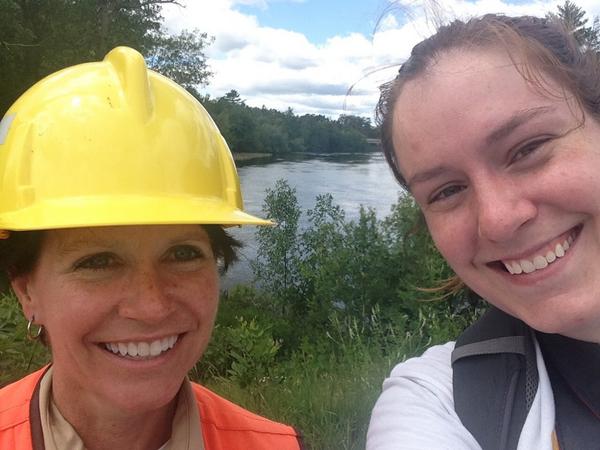 This morning I headed over to the Forest History Center in Grand Rapids.

Since we were on a tight timeline, the site manager Jeff met me and showed me around via golf cart.

The Forest History Center consisted of a Visitors Center with various exhibits and artifacts and a historically accurate reproduction of a logging camp from the 1900s. I was able to see and climb up an actual fire watch tower that was around 100 feet high that was used in identifying and monitoring forest fires. A watchmen would see smoke and call down to another tower which would also look for the smoke. Between the two locations, they were able to accurately place where the fire was and send firefighters out to combat the fire.

Jeff explained that this was before the times when people realized that some small, controlled fires were natural and actually beneficial to the forest. The logging camp was also very interesting, men in accurate costumes worked in various buildings such as a blacksmith and a cook. I learned that the cook was the highest paid and most important person in camp, as good food attracted hard workers. Food was also essential because loggers would burn around 5,000 calories a day!

From there, I went to the UPM Blandin Paper Mill and met up with Laura from the Department of Natural Resources (DNR) and Jim from the mill. Jim informed us that the paper industry has declined in recent years, largely due to the rise of digital media, but that their mill has been resilient and has become very efficient in order to stay successful. The sheer number of logs in the yard was truly breathtaking. Although we were not able to go inside the mill due to safety and other restrictions, I did get to see the Mississippi River in its smaller form, which is something I never thought of, being from Chicago.

I then drove a short distance to the Grand Rapids DNR Headquarters to talk with the Assistant Area Supervisor Lonnie who has been working for the DNR for almost 19 years. She was very nice, and showed me how they measure and take cores of trees to determine their health and age. It was fascinating seeing all of the equipment the foresters use when working with trees, and I got some cool photos of her working as well!

Finally, I drove over to Duluth and toured around Skyline Scenic Drive, stopping to get gorgeous panoramic views of the harbor and skyline. The scenery was beautiful but also had a lot going on, including several large ships coming in to port. I was also able to stop at several beautiful parks along the way and see people enjoying the recreational opportunities there. All and all, it was a very fun and busy day!