Members and congressional staff honored for leadership in forest policy.

The award, presented at the organization’s annual partners reception, is named in memory of former Washington State Forester Bernard L. Orell (1914-1983). The Orell award is presented periodically to deserving members of Congress who have made significant contributions to state and private forestry and is the highest honor to be awarded from NASF. 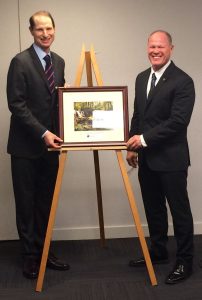 “The National Association of State Foresters is honored to recognize the leadership of Congresswoman Jaime Herrera Beutler and Senator Ron Wyden for introducing the Silviculture Regulatory Consistency Act in the House and Senate and working to secure its passage as part of the Farm Bill. Our awardees demonstrated unwavering support for state-based forestry best management practices to ensure water quality when managing our forests,”said Jim Karels, Florida State Forester and President of the National Association of State Foresters.

“Congresswoman Herrera Beutler and Senator Wyden demonstrated true leadership in working with colleagues from both sides of the aisle and navigating the challenging politics in the run-up to the Farm Bill.”

“Foresters are a bedrock part of rural Oregon’s economy, both harvesting timber and doing the work to restore forests and reduce fire danger. That is why I pushed for years to pass this bill to protect forestry jobs, and why steering our country toward sensible forest policy remains one of my top priorities.  I am proud to receive this honor from the National Association of State Foresters and to continue representing hardworking foresters in Oregon and across the country,” Senator Wyden said. 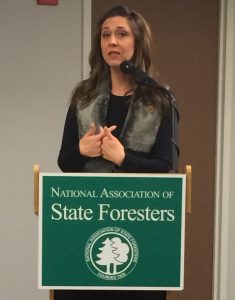 “The residents of Southwest Washington rely on healthy forests for their livelihoods, their recreation, and the survival of their communities. I am very proud of the bipartisan, bicameral forest roads bill we secured into law this year that keeps in place four decades of science-based protection of our forests,” said Congresswoman Herrera Beutler.

“This legislation provided a significant win for the men and women who depend on sustainable forests for family-wage jobs.  It is an honor to receive the Bernard L. Orell Award from the National Association of State Foresters in recognition of our work to safeguard the health of our ecosystems and communities,” said Herrera Beutler. 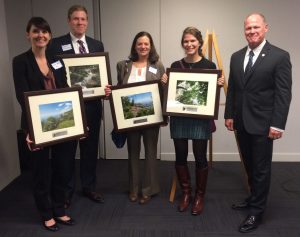 The following current and former Congressional committee staff members also took a leadership role in the 2014 Farm Bill Forestry Title process and were presented with the 2014 Outstanding Service in Forest Public Policy awards: