The 2021-2022 NASF Annual Report highlights the association’s many efforts to advance the policy and communications priorities of its membership. In the last 12 months, NASF has had a number of notable successes:

Boosted the relevance of NASF’s policy positions in Washington, D.C., and the reputation of state foresters nationwide with strategic communications. NASF advanced the interests of state foresters by advocating for key federal cooperative forestry programs through the annual appropriations process and earned national media. The association also released three short films as part of a video series called “Tree Stories,” featuring footage from each of NASF’s three regions, and launched an online clearinghouse for forest carbon resources. 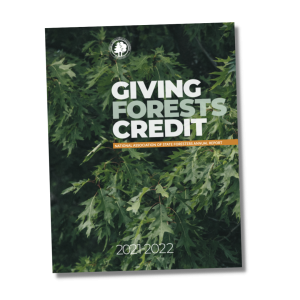 Established policy priorities for the association that the membership and staff worked to advance throughout 2022. In July 2022, NASF President Christopher Martin testified in-person before the House Agriculture Subcommittee on Conservation and Forestry in a hearing titled “A 2022 Review of the Farm Bill: Forestry.” NASF also advocated for the passage of impactful legislation and two massive spending bills, in addition to providing official comments on legislative amendments and administrative actions and proposals.

These accomplishments and more are detailed in this year’s annual report. Click the link below to read the report in full online or contact NASF Communications Director Whitney Forman-Cook to request a hard copy.