By Rick Cantrell and Whitney Forman-Cook | This blog is a cross-post that appeared in the Winter 2020 edition of the National Woodlands Magazine.

The National Association of State Foresters is celebrating its 100th anniversary in 2020 with a Centennial Challenge campaign, honoring both the work of the association in providing a unified voice for state and private forestry since 1920, as well as the tremendous social, environmental, and economic contributions state forestry agencies have made over the last century. 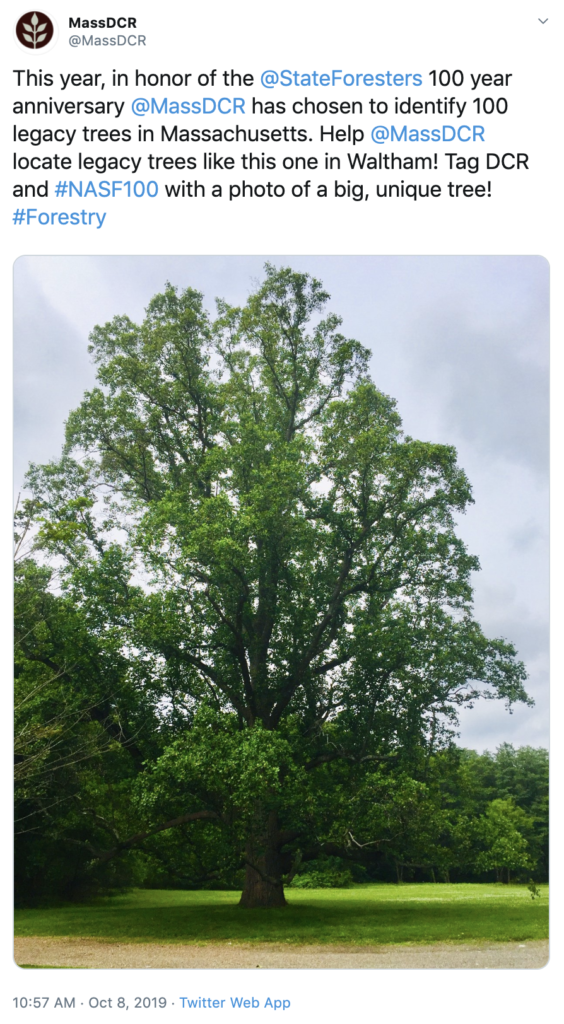 The Centennial Celebration began in September at NASF’s 2019 Annual Meeting in Asheville, North Carolina, and will culminate at the 2020 NASF Annual Meeting in Pittsburgh, Pennsylvania. Already, several states have launched their challenges. Many of these Centennial Challenges are private lands-focused and many more rely on the participation of private landowners like you. Take Massachusetts’ for instance:

For their Centennial Challenge, the Massachusetts Department of Conservation and Recreation’s Forestry Department is asking its staff, partners, and Massachusetts residents to help identify 100 unique, significant, and otherwise noteworthy legacy trees on public and private land across the state.

A Massachusetts Legacy Tree can be any tree that is compelling for its age, size, form, history, species, and/or botanical interest. Head to www.stateforesters.org/news-events for more information on Massachusetts Centennial Challenge, as well as North Carolina’s and Washington state’s.

One of the drivers of sustainable forest management on private lands is state forestry agency-prepared stewardship plans. In 2018, state forestry agencies developed 13,000 forest stewardship plans covering more than 10 million acres, the majority of which address areas designated as ‘high-priority’ in state Forest Action Plans. They also assisted 8,550 local governments with planning and caring for their communities’ tree canopies, which are also an important consideration addressed in Forest Action Plans.

As you well know, working forests are central to sustaining the economic, ecological, and social well-being of communities large and small, nationwide through the jobs they support and the benefits they provide. State-led Forest Stewardship Programs empower private landowners with the information they need to sustainably manage their forests. Forest Stewardship Plans encourage active and sustainable forest management that provides recreation, forest products, wildlife habitat, clean water and air, and renewable energy. State services also support a tremendous economic engine for the United States:

LOOKING AHEAD TO THE NEXT 100

No one can predict what the next 100 years will look like, but you can bet state forestry agencies will be working to ensure the continued health and vitality of our greatest natural resource—America’s working forests.

Join us this year in celebrating our 100-year anniversary of working together to help conserve America’s state and private forests. Throughout the year-long campaign, we’ll be spotlighting state forestry agencies’ Centennial Challenges online. Help spread the word about your state agency’s good work by sharing or retweeting social media posts with the hashtags #CentennialChallenge and #NASF100, or by following our handle @stateforesters on Twitter, Facebook, and Instagram. Next quarter, we’ll have a Centennial Challenge update just for NWOA readers.